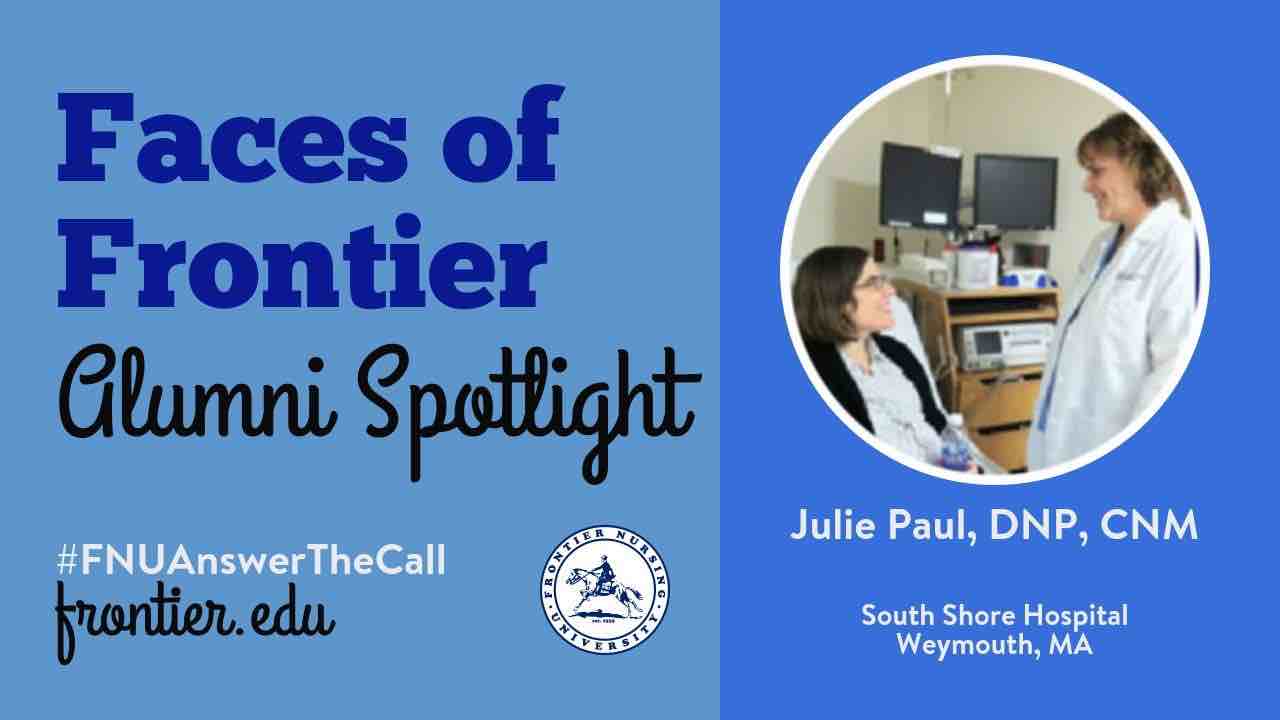 alumna Dr. Julie Paul graduated from CNEP class 42 (2006) and returned to earn a DNP in Class 4 (2011). She has worked in a large midwifery practice since 2006 at South Shore Hospital in Weymouth, Mass., and serves there as the co-director of a certified nurse-midwife hospitalist program.

Julie has led the creation of a unique and innovative early labor management (ELM) program. A centerpiece of the program will be an early labor lounge—the only one of its kind in the U.S. The quality improvement (QI) program was initiated by certified nurse-midwives, nurses and physicians at South Shore Hospital and is supported by the chief medical officer, chief nursing officer and obstetrics chief in their hospital.

When developing the ELM program, Julie worked with the chief and many  nurses from the hospital’s obstetrics unit, midwifery colleagues, nursing administration and FNU co-faculty member Susan Yount. The project originally was meant to be a local project to promote spontaneous progress in labor, using standardized procedures, in order to reduce the numbers of women having Cesarean sections.

Julie’s “brainchild” design for an early labor lounge, created in collaboration with hospital colleagues, enables women to progress through a sequence of interactive “stations” during early labor. The lounge is an alternative to the sort of waiting room that women typically encounter in hospital labor and delivery units. Activities in the lounge are intended to delay admission to the birthing unit until active labor is established by reducing  stress and providing education and support in early labor.  For instance, an acupressure station helps mothers with back pain while in labor, while a couch with a meditation CD helps with anxiety.

Already the South Shore NTSV cesarean birth rates have decreased from approximately 33% to a current rate of 23-25%—as the number of midwifery births has increased and women are given longer times to labor before diagnosing labor dystocia. South Shore delivers about 3,500 babies a year, with 60-80 of those births attended by nurse-midwives—more than double the 30 births in 2012.

The South Shore ELM team presented a workshop at the American College of Nurse Midwives (ACNM) annual conference in 2016. Julie and her colleagues creatively developed a unique program that aligns with the national ACNM QI Reducing Primary Cesarean (RPC) initiative. They submitted a letter of intent to a multi-site ACNM QI initiative and were chosen to be part of the ACNM Reducing Primary Cesarean Collaborative; a data-driven quality improvement collaborative.

Quickening, a quarterly journal of ACNM, will feature an article on the early labor lounge this fall. Julie’s collaborative team will monitor the results of the mothers’ participation in the education program and early labor lounge over the course of this next year. Inclusion in the ACNM QI program takes their local project to a national arena. The development of this project is a perfect example of how  nurse-midwives are change agents in the health care arena.

We are proud to have FNU alumni like Julie who are making a difference!