Katharine More was a Courier in the summer of 1952. She does not remember how she learned of the program, but it was something that her and her family always had knowledge of. Katharine “was interested in doing something worthwhile, something that would be good for humanity.”

Katharine’s wish to do good for 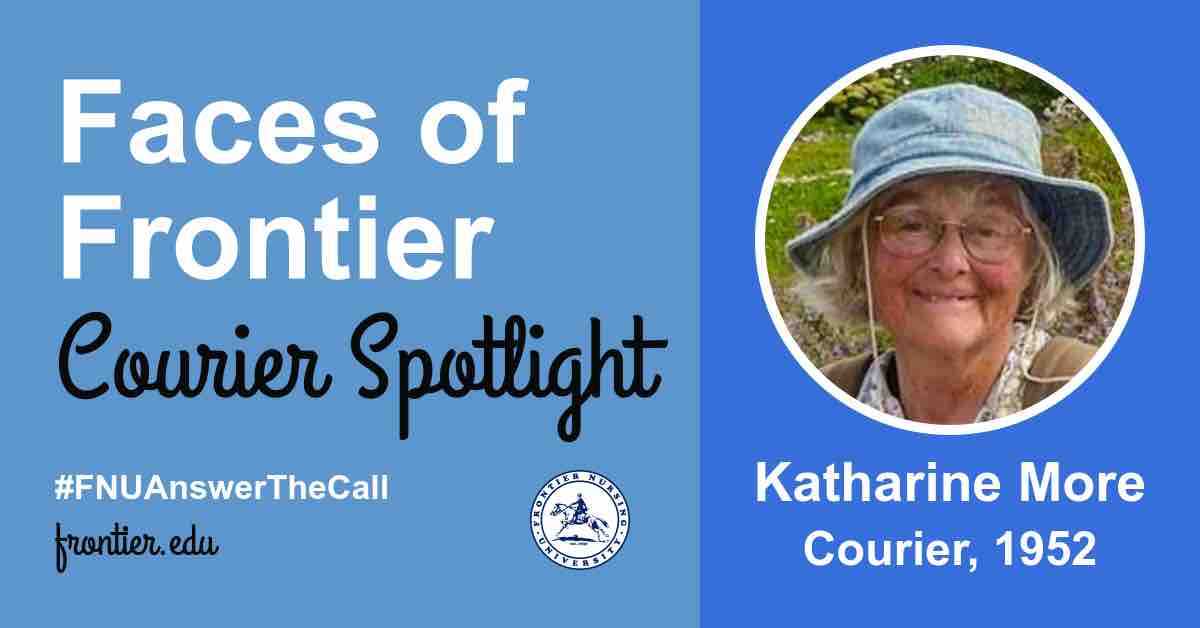 humanity started long before her participation in the Courier Program. In fact, she believes this is what inspired her to participate. When Katharine was just out of high school, she accepted a job with the Junior League in which she worked in social services. She led a group of girls who lived in a high poverty area just north of Boston. Katharine believes the Junior League may have been one of the places in which she learned more about Frontier Nursing Service, although she is not certain.

Additionally, Katharine was excited about having the opportunity to work with horses. Her family owned a barn that housed several horses and a pony. She rode frequently along with her older sister, who won ribbons in horse shows and even rode with the mountain police. Horses were a big part of her life and she was excited about this aspect of the Courier Program.

Katharine spent her first week in Wendover taking care of the horses at Hyden Hospital. After this was done, the Couriers were able to help with whatever jobs were needed. As a Courier, Katharine took care of horses in the morning and spent the remainder of the day ferrying supplies and assisting the nurses.

Katharine remembers the eagerness of her fellow Couriers to attend a “baby catching” trip with one of the midwives. She, however, did not share this same sense of eagerness as Katharine’s interest in simply doing something good for people. This was more of an interest than her interest in the healthcare aspect of the program.

One of the big assignments for the Couriers while Katharine was at Wendover was a 2-3 day trip to reach a horse and bring it back to Wendover. All of the Couriers were hopeful that they may be awarded this opportunity. In order to avoid favoritism, the Couriers had to decide amongst themselves who would take this trip. Katharine had been asked to stay an extra six week at Wendover so she decided to withdraw herself from this competition, but she recalls this trip was “the big prize” of the Courier Program.

Katharine’s most enjoyable part of the Courier Program was learning about the culture of the region. “It was an education to see firsthand how some of those folks on the mountainsides lived in cabins…,” reflected Katharine. She particularly remembers learning about the coal mining business as a Courier, an industry she had no prior knowledge of. She recalls an incident where she saw an overturned coal truck, which sparked her interest to learn more about coal mining. As coal mining was an important business in the area, it provided insight into the local culture.

Katharine was very happy to be a part of the Courier Program and after reflecting about the program, she came to an important realization. She truly believes “what people bring to the experience has a lot to do with what they get out of it.” She put a lot into her experiences and time spent as a Courier, and she was confident that these efforts made an impact. She is thankful that the Courier Program legacy continues on with future generations of Couriers and advises them to follow this same advice!