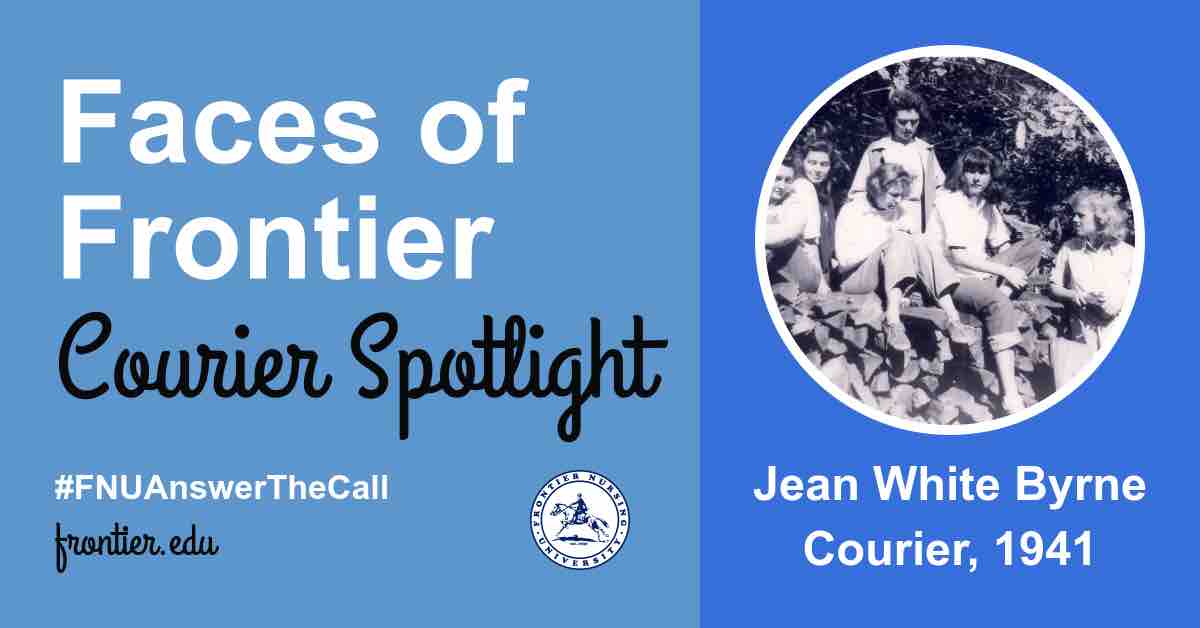 Program from a professor at Maryville College. Her professor encouraged her to travel to Frontier in her junior year to assist with bookkeeping. However, it was not until just prior to her graduation in 1941 that she made the decision to come to Frontier Nursing Service.

Jean remembers a few “unspoken” rules that the Couriers abided by while in Wendover. First, they were not allowed to speak about religion or politics. Second, they always had to stay on the path. If they traveled off of the path they could have crossed into moonshiner’s territory which was forbidden. Jean says they all stuck by these rules while they were there.

As a Courier, Jean worked in the hospital every Monday. She rode by horseback through rain, wind, or sleet to be there every week. She remembers riding horses with two fellow Couriers up Camp Creek one day. They were riding along a narrow path approaching the mountain when the horses were startled by a loud sound, from what they later found to be a fallen tree in the forest. The horses turned the other direction and took off running. Somehow all three of the Couriers managed to remain in their saddles, and they were able to pull the horses back onto the path.

One of Jean’s most significant memories at Wendover occurred in 1942 when the Garden House caught fire. She was the last one in the Garden House that day. While they were eating in the Big House, they heard someone yell “Fire!” and everyone rushed out to the Garden House to see smoke billowing out. The bookkeeper at the time was able to grab a typewriter and some records through a window, but all other records as well as personal items left inside were destroyed by the fire.

Mary Breckinridge was away when the fire occurred so Agnes Louis had to find a way to communicate the events to her. Mary Breckenridge instructed Agnes to begin re-building the Garden House immediately.

Celia Coyte and Jean were the only two who were able to do architectural drawing as they both had taken mechanical drawing in high school so they took the lead on the re-design project. Jean and Cecilia agreed that the old Garden House did not have enough wash basins, toilets, or tubs so they created the new design with 3 tubs and 4 basins. They decided the bathroom should take on a dormitory style. The Garden House was rebuilt exactly as they designed it.

Jean stayed at Wendover until September of 1942 when she got married. She was working for various attorney’s offices in the Maryville area. In 1943, Mary Breckinridge called her to ask for her assistance in Wendover. Jean returned from 1943 to 1946 while her husband was in the service.

During her return, she remembers having her appendix out at the hospital in Hyden. She was directly across from a birthing room and remembers hearing a woman giving birth, assisted by one of the Frontier midwives. It was a nerve-racking experience for both the new midwife and the new mother. However, when Brownie from Frontier arrived, she was able to calm down both parties and the rest of the delivery went smoothly.

Jean returned home to Maryville in 1946 but will always remember her experiences as a Courier and hold them dear to her heart.